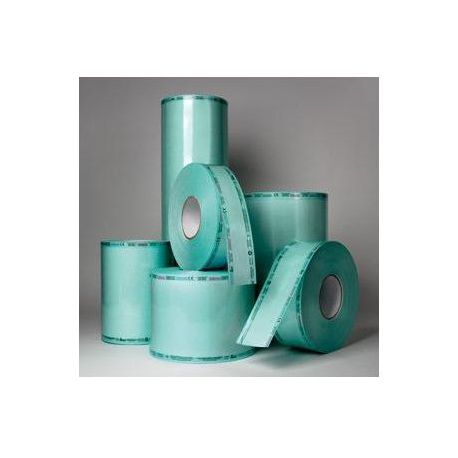 Flat rolls for sterilization are derived from a production system with cutting of very high quality and precision such that it does not release fibers and paper particles on the surfaces and by a winding system that guarantees compactness and resistance to the product. Printing occurs on the line outside the space useful for sterilization along the welds between the paper and the film.

For ethylene oxide the sterilization temperature is 30 ° C - 54 ° C and the color changes from blue to yellow;

By steam the sterilization temperature is 121 ° C - 134 ° C and the color change changes from pink to brown.

The rolls are controlled according to MIL-STD 105E according to the following criteria: AQL 0.65 S.I.L.S-2 for functional and dimensional controls and AQL 1.5 G.I.L. I for visual checks.

They are subject to a single sterilization process, since it is a medical surgical device CE Class I REG 112762 CND S01020101 to ministerial certifications, with Technical File 01-I-CE BRS of 07.14.2004 last revision 07 of 04/28/2009 under DIR 93/42 / CEE, disposable so once used it must be discarded as absolutely not reusable for a second sterilization cycle.

It is absolutely forbidden to use if the roll is damaged.

WARNINGS FOR THE USE OF FLAT ROLLS:

1) Before carrying out the sterilization process, check that the roll is filled to a maximum of ¾ (three / fourths) of its volume in order not to obstruct the adequate welding margins and extreme support.

2) Cover the points and sharp edges with suitable protections.

3) Arrange the instruments with the handle towards the opening of the roll.

4) Do not use any solvent in printing the roll.

5) Any endorsements are made on the labels to be pasted on paper or film; Never write directly on the flat roll, so use the utmost care to avoid contamination problems during use.

6) Carefully evaluate the total weight of the inserted tools in order to avoid the risk of breakage.